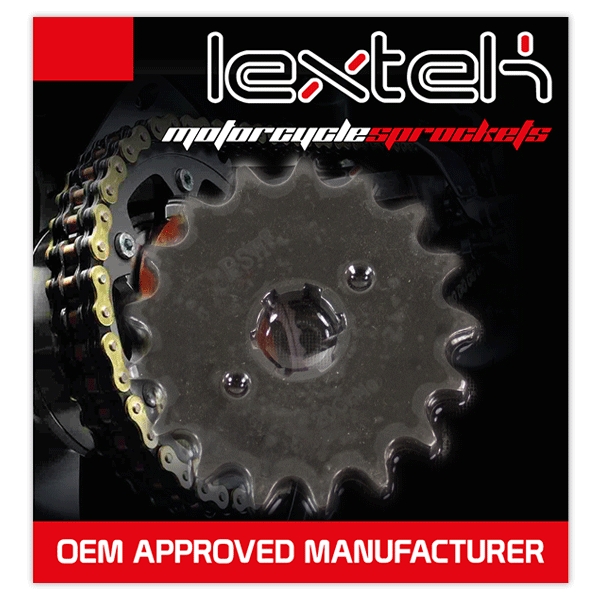 Order now for dispatch on Monday

This product been given a rating of 8.7 out of 10 rating based on 19 reviews on

Very happy with the cost and timing

Product arrived earlier and is of great quality

Very solid item,exactly what I wanted! Fast delivery and yet again,a perfect experience start to finish

Very hard with the service thank you very much

Cheap and do what they should

Great quality products do exactly what it says on the tin

Was looking at changing the stock 15T front sprocket on my Lexmoto Arizona to slow the revs a little at the top end and hopefully add a few miles per hour. Ordered a 17T which was delivered within 3 days which included the weekend. Good quality part. Fitted within minutes. With the revs slowed due to change in the gearing ratio the bike seems a much smoother ride. I can now achieve 70mph with out the bike screaming giving everything it has. Great service and quality parts. Thank you

Decided to increase the gearing of my xtrs 125 by going up a couple of teeth on the front and it has transformed the bike. Now I can cruise on the with fewer revs and less vibration. On a hill I used to struggle up in 5th I now just ride up comfortably in 4th instead. My only complaint is the Yodel delivery driver went to the wrong house. I got an email saying they were sorry they missed me and had left a card. But that was a lie. I found out that the people who live at the same number as me but on the next street had told him exactly where my house was, but he had just driven off anyway. So I wasted a day waiting in for nothing. Yodel said they couldn't do anything and I would simply have to hope the driver the next day got it right.

Great quality item from a great company. This is just the support that's needed to make Chinese bikes a viable option in the UK. Having a vast resource like cmpo makes repairs or mods so easy, cheap and fun. Throw in the fact that they deliver super quick and we have a winner. Keep up the good work

Brought as an upgrade for my sukida 125 patriot. Although wasn't listed as a part for my bike, I was confident with the description that it would fit my bike. And now have a smoother accelerating bike and lower revs at top end with an increase in speed with the 39 tooth rear sprocket which I also purchased.

Fits well works great. Does what they are meant to do...